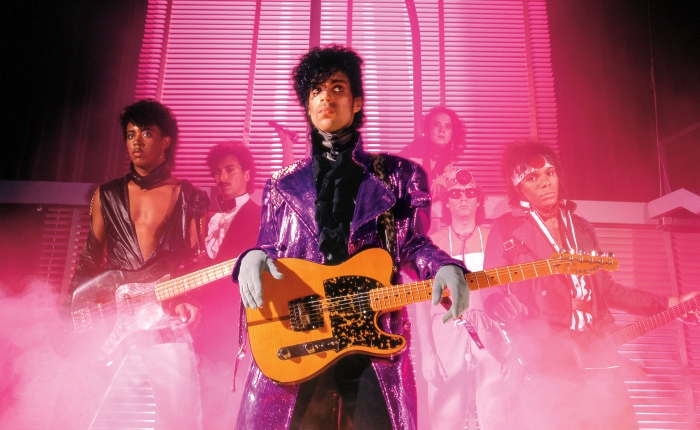 By mid-July of 1982, Prince had completed work on the album that would become 1999, with just one significant exception: “1999,” the song, was nowhere to be seen. According to a recent tweet by former associate Jeremiah Freed (better known by his nom de podcast Dr. Funkenberry), Prince had originally planned for “Turn It Up” to be the album’s lead single. It’s speculation on my part, but I wouldn’t be surprised if it was also intended to be the title track, given how exhortations to “turn it up” recur throughout the songs recorded for the album: including “All the Critics Love U in New York,” “Lust U Always,” and the early versions of “Feel U Up” and “Irresistible Bitch.” As Josh and Christy Norman of the Mountains and the Sea podcast recently observed, the phrase can even be made out spray-painted behind Prince and the band in a late 1981 photo taken for the “Let’s Work” 12” sleeve.

But whatever its intended title, when Prince played a rough mix of the album for his manager Bob Cavallo, the reception was cooler than anticipated. “‘This is a great album, but we don’t have a first single,’” Cavallo recalled telling Prince in an interview with music journalist Alan Light. “‘We have singles that’ll be hits, but we don’t have a thematic, important thing that can be embraced by everybody, different countries, et cetera.’” In response, Prince “cursed me, and he went away–but he didn’t force me to put it out. Two weeks later, he came back and he played ‘1999,’ and that became the title of the album” (Light 43).

END_OF_DOCUMENT_TOKEN_TO_BE_REPLACED

(Featured Image: The Time’s Morris Day and his sparring partner, the Artist Formerly Known as Jamie Starr, circa 1982; photo by Allen Beaulieu.)

The Time’s second album, What Time is It?, was released on August 25, 1982–just two weeks after the self-titled debut by Vanity 6. It easily outperformed both Vanity 6 and the Time’s own debut, and effectively tied with Prince’s previous album Controversy: peaking at Number 26 on the Billboard 200 and Number 2 on the Black Albums (recently renamed from “Soul”) chart.

Despite their success–or, more likely, because of it–Prince was determined to keep the spinoff group in their place. Studio tech Don Batts recalled him showing up to one of the band’s rehearsals with a rough mix of the finished record: “He threw the cassette at [guitarist] Jesse [Johnson] and said, ‘Hey man, you play really good on your album,’” Batts told biographer Per Nilsen. “That kind of comment, it was like saying, ‘Hey puppets!’” (Nilsen 1999 108).

More than anything, though, Prince kept his grip on the Time’s strings by saving their best material for himself. It’s hard to hear What Time is It?’s underwhelming closing track, “I Don’t Wanna Leave You,” without imagining a stronger alternative in its place: something that would end the album with a bang, rather than a whimper. Something, that is, like “International Lover,” which Prince had originally conceived for his side project back in January before poaching it for the finale of his own forthcoming album.

END_OF_DOCUMENT_TOKEN_TO_BE_REPLACED

As we’ve noted before, Prince credited the musical performances on Vanity 6 to his other protégé group, the Time–a fabrication that would later come true when they performed the girls’ backing tracks from behind a curtain on the 1999 tour. Of the eight songs on the album, only one sounds particularly “Time-like”; but that one song fits the description to a T. With its Terry Lewis-written funk bassline and song-dominating comedic skit, “If a Girl Answers (Don’t Hang Up)” could almost pass for an escapee from the Time’s own sophomore album, What Time is It?

Like the skits from Time songs “The Walk” and “Wild and Loose,” the one in “If a Girl Answers” unfolds from a simple, even stereotypical comic situation: in this case, working girls Vanity and Brenda trying to figure out transportation to a party on their night off. Brenda suggests that they call “Jimmy”–a male suitor, possibly Jimmy Jam from the Time, but more importantly a person with a car. Vanity expresses her doubts: “And what if a girl answers?” Brenda shrugs, “Hang up.” But Vanity isn’t satisfied by that answer; Jimmy said she was his girl. Well, Brenda offers, “if a girl answers, don’t hang up, just talk about her.”

The exchange that follows–a duel of escalating gibes between Vanity (and, later, Brenda) and Jimmy’s new girlfriend–draws on many of the same Black and blue comedy tropes as its counterparts in the Time’s catalogue. The ladies’ larger-than-life performances channel everything from LaWanda Page in roast mode to Millie Jackson’s raunchy midsong monologues. The inventive vulgarity of their barbs evokes that traditional African American game of verbal combat, “the dozens,” with references to the other woman’s “dead daddy” taking the place of the more customary maternal ur-insult.

But while its roots in Black nightclub comedy and “dirty blues” are undeniable, “If a Girl Answers” also carries the lipstick traces of another, more subcultural source. In the song’s most remarkable stylistic choice, the titular “girl” on the other side of the phone is portrayed by none other than “Jamie Starr,” in all his queen-bitch glory. The endemic queerness of this performance–as close to straight-up drag as Prince ever came–conjures another vibrant African American comic tradition: a devastating display of rapier wit with origins in Harlem’s underground house ball culture, known as the “read.”

END_OF_DOCUMENT_TOKEN_TO_BE_REPLACED

We’re down to my final three appearances on Darren Husted’s Prince: Track by Track podcast! This time, the subject is (probably) my favorite track from Prince’s last three albums:

Prince Track by Track: “U KNOW”

Also, as promised, my review of Lizzo’s new album is up on Slant Magazine! She’s come a long way from “BOYTROUBLE”:

Hoping to have another Vanity 6 post up by the end of the week–and, of course, it being Celebration week, I’d be surprised if there wasn’t a “new” track to write about sometime in the next couple of days. We’ll see what happens!