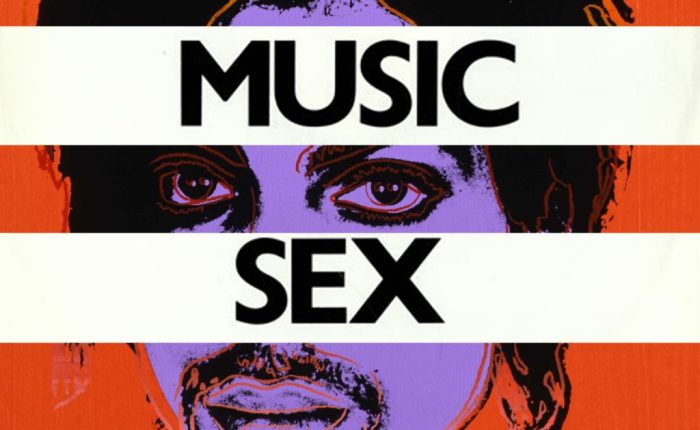 It’s hard to believe that it’s been a whole two years since I launched dance / music / sex / romance. I want to thank everyone who’s been following along thus far; many of you, I know, have been here pretty much from the beginning. If you need a refresher on (most of) what’s happened since the last year-end round-up, here you go:

And for those who are just stumbling upon it now, here’s where I recommend you start (all of the posts in chronological order):

The Story So Far

Last but not least, here are the podcast episodes released since last June. First, the miniseries on the University of Salford’s Purple Reign conference:

Welcome to the New Story: Jane Clare Jones
The Evolution Will Be Colorized: Zack Stiegler
It’s Time Someone Programmed You: Leah McDaniel
Everybody Shut Up, Listen to the Band: Felicia Holman and Harold Pride
Something Wrong with the Machinery: Carmen Hoover
Vous êtes très belle: Joni Todd and Karen Turman
I Know That the Lord is Coming Soon: Erica Thompson
I am Something That You’ll Never Understand: Chris Aguilar-Garcia and Natalie Clifford
Yes: Chambers Stevens

Then the miscellaneous episodes, including a few with noted authors in the Prince community:

Am I Straight or Gay: Snax
24 Feelings All in a Row: Duane Tudahl
Nothing Compares: Marylou Badeaux
The Crazy Things You Do: Kimberly C. Ransom
Paisley Park is in Your Heart: Stuart Willoughby

And finally, the first installment of what I hope to be another miniseries offering alternate perspectives on Prince’s studio albums:

So, what have we done in the last 12 months? A little less than I promised this time last year, but also a lot more. If you look purely at the number of songs covered on the blog, my progress has slowed significantly: a mere 20, versus last year’s 45. If I keep up this pace, the 2036 end point I semi-jokingly offered last year just might become a reality. But I’ve also been doing a lot more than I was doing in June 2017. The podcast has taken on a life of its own; I’ve become a regular guest on another podcast, Prince: Track by Track; I wrote an essay about Prince and New Wave for publication in an anthology on Prince and the Minneapolis Sound; I presented on two panels at the Prince from Minneapolis conference; I launched my own magazine, thanks in large part to the support and goodwill of a small but dedicated group of readers.

I’m not gonna lie, I have more plans for extracurricular activities in 2018-19. Some of them depend on external forces outside my control; some of them you’ll probably be hearing about in the near future. But I also think that the next 12 months of d / m / s / r will be a little bit of a “back to basics” move. I really want to get through more than two albums by next June; I really want to go back to my weekly post routine. I have some thoughts about how to make this possible with my other commitments, which I’ll be sharing in the near future. For now, if you’ve been reading this blog, thanks for hanging in there for the lean times and thanks for your support. And if you’ve just started reading, welcome! I hope you enjoy this labor of love as much as I continue to. 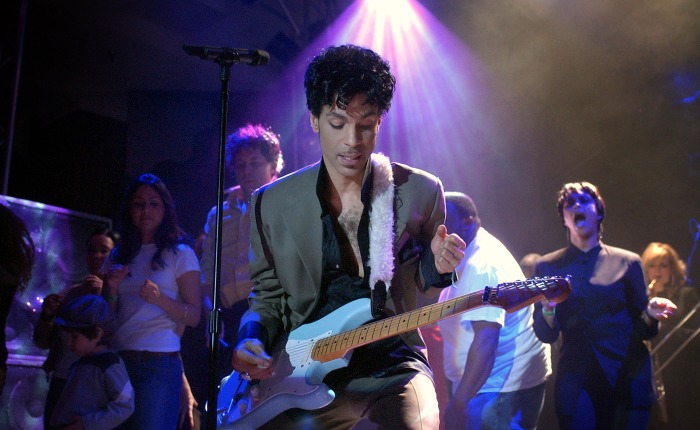 (Featured Image: Prince at the El Rey Theatre, Los Angeles, 2004; Chambers is behind him on the left. Photo by M. Caulfield.)

It’s been over half a year since the University of Salford’s interdisciplinary Prince conference, but I keep connecting with people who presented there and whose topics of research are too interesting not to discuss. This time, I’m talking to actor and playwright Chambers Stevens, who has a fascinating theory about the influence of improv training on Prince’s approach to life and performance. But we aren’t just retreading Chambers’ presentation from the Salford conference; he also has some hilarious stories to share about his own run-ins with Prince (and Chaka Khan), as well as some thoughts about the peculiar nature of Prince fandom. We had a lot of fun recording this–hopefully you’ll have fun listening as well!

And speaking of fun, there’s still a little more time to participate in my giveaway for a free copy of Duane Tudahl’s new book Prince and the Purple Rain Era Studio Sessions: 1983 and 1984

. The rules are simple: just subscribe to d / m / s / r on your podcast app of choice (logging into iTunes or Stitcher and searching “dance music sex romance” should do the trick), and leave a review. It doesn’t have to be a positive review; feel free to rake me over the coals if you want, just make it well-written. On Tuesday, December 12, I’ll look at all the reviews that have been submitted, pick my favorite–again, not necessarily the most positive!–and announce the winner on the next episode of the podcast. Oh, and speaking of that next episode, this is one you’re not going to want to miss: I was fortunate enough to speak to the one and only Marylou Badeaux, former V.P. of Special Projects at Warner Bros. Records and author of the upcoming memoir Moments: Remembering Prince. Come back and listen to it next week!

END_OF_DOCUMENT_TOKEN_TO_BE_REPLACED

(Featured Image: Prince at his most gender-nonconforming on the Lovesexy tour program cover, 1988; photo by Jeff Katz.)

Here at last, after much delay, is my conversation with Chris Aguilar-Garcia and Natalie Clifford, two presenters from this May’s interdisciplinary Prince conference at the University of Salford. Both Chris and Nat identify as queer, and both have very interesting things to say about Prince’s legacy of “revolutionary queerness” and the space he created for less conventional expressions of gender and sexuality in the mainstream. If you liked the last episode with Snax, chances are you’re gonna like this one.

This is the part of the description where I would normally say we’re switching gears and moving away from the Salford conference, but as it happens, we already have another interview with a presenter in store. So basically, I’ll keep doing these as long as people want to talk to me. If you still want to listen to me–and, more importantly, my eloquent guests–feel free to subscribe on your podcast service of choice (iTunes, Stitcher, or Google Play), or listen on Mixcloud. And if you really like us, take that aforementioned podcast app and shoot us a rating or review; it will make us more “discoverable” and broaden the listening base. In the meantime, thanks as always for listening!

END_OF_DOCUMENT_TOKEN_TO_BE_REPLACED 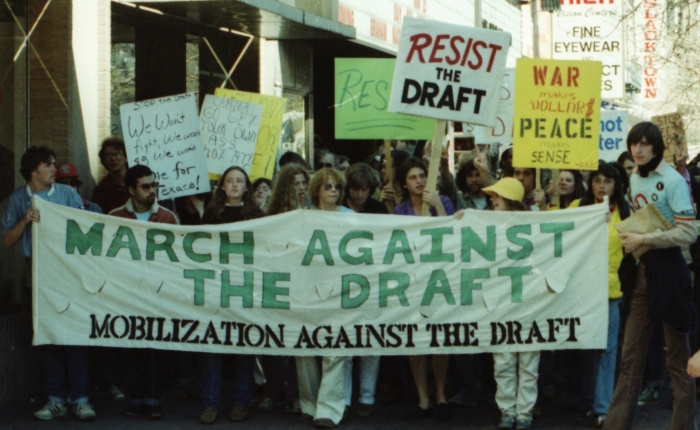 During the promotion cycle for Dirty Mind

in late 1980 and early 1981, Prince talked to the press more than ever before–more, indeed, than he would again until the 1990s. His reasons were purely strategic. Prince’s manager, Bob Cavallo, had hired publicist Howard Bloom with the express goal of breaking their artist into the rock market; to accomplish this, Bloom helped Prince to shape his back story into a compelling and marketable artistic persona, which he then dutifully presented to every reporter who would listen. This was the birth of what we’ve been calling Prince’s “origin myth”: the Oedipal struggles with his mother and father; the sexual and creative utopia he found in André Anderson’s basement; the precocious sexuality and artistry that would find its full expression, conveniently enough, in the album he was currently promoting. The press ate it all up like the confection it was. Bloom “would tell people, ‘Prince sees sex as salvation,’ and then you’d see that in the Washington Post, the New York Times,” Cavallo told biographer Matt Thorne. “He comes up with that phrase and then ten writers use that phrase” (Thorne 2016).

Read enough of Prince’s interviews from the Dirty Mind era and Bloom’s talking points come into sharp relief: titillating racial and sexual ambiguity, a fierce desire for aesthetic authenticity, and an appetite for rebellion–all like proverbial catnip to rock’s punk-era tastemakers. But in one interview with Chris Salewicz of England’s New Musical Express, published in June of 1981, Prince made a specific claim that stands out amidst his more generalized myth-building. “I was in a lot of different situations when I was coming up to make that record,” he recalled. “A lot of anger came up through the songs, it was kind of a rough time. There were a few anti-draft demonstrations going on that I was involved in that spurred me to write ‘Partyup’” (Salewicz 1981).